Here are some illuminating posts about COVID-19. Never mind the quotes, please read the originals as they are full of interesting information.

Too often we see “cumulative cases” which does not tell todays story. “New cases” or “incidence” is better. But best to guide action is ACTIVE CASES = sources of virus = (total cases minus recovered cases minus deaths). 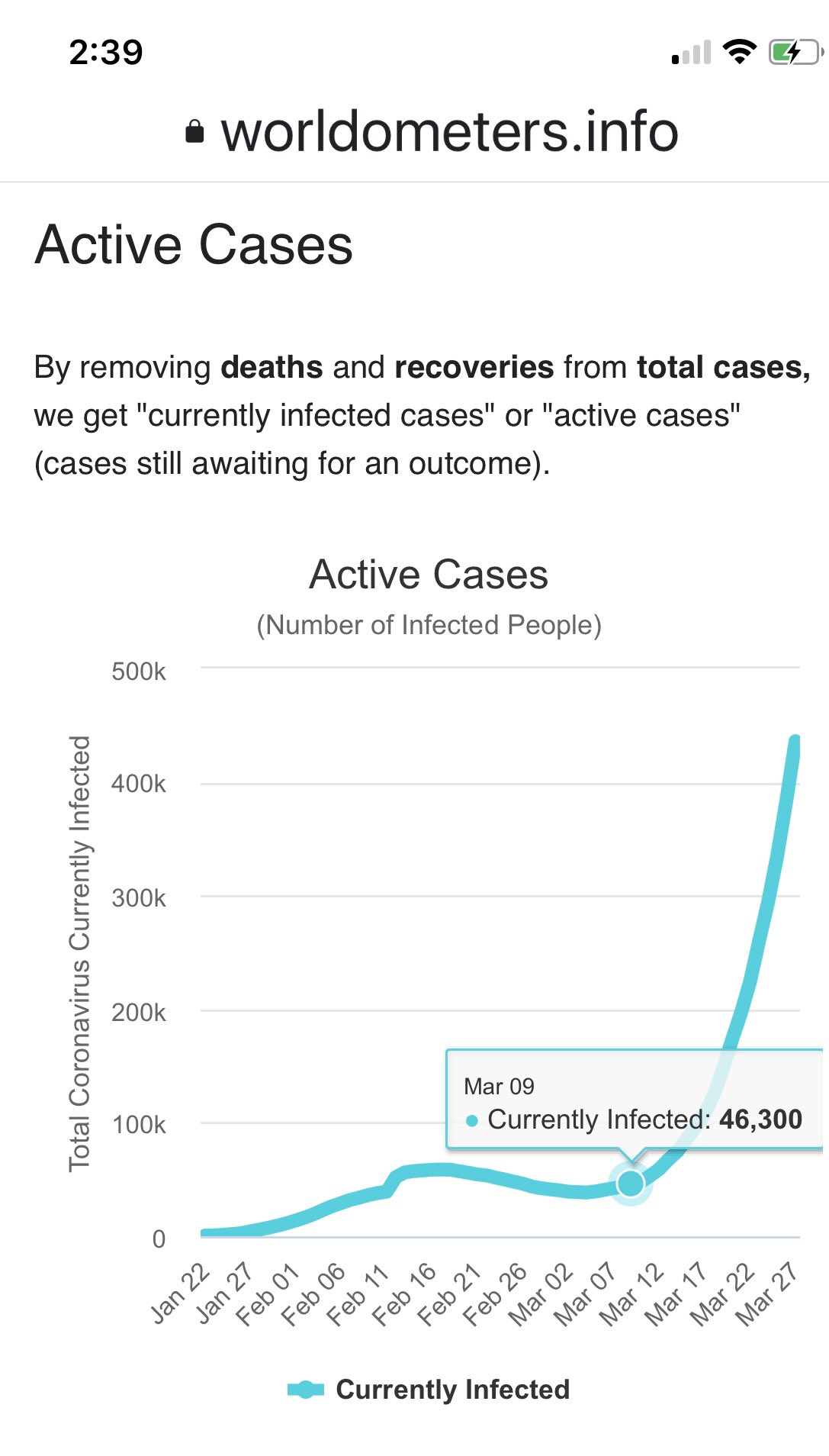 Should you really wash your food with soap?

I'm a food microbiologist... Don't take food safety or microbiology advice from MDs that don't understand food, science or very much about microbiology.

Are you really going to keep your milk, your ice cream, your deli meats outside for three days?

But this advice presumes that all groceries are contaminated, and the simply touching the groceries will make you sick, neither of which are true.

Do I really need to scrub all your fruits and veggies with soap before eating? This is the worst advice being given by this irresponsible MD. Soap should absolutely not be used to wash food.

First, some basics: According to the Centers for Disease Control and Prevention (CDC), the virus “is thought to spread mainly from person-to-person.” It cites two primary forms of transmission: “Between people who are in close contact with one another (within about 6 feet) [and] through respiratory droplets produced when an infected person coughs or sneezes. These droplets can land in the mouths or noses of people who are nearby or possibly be inhaled into the lungs.”

When it comes to concerns about coronavirus transmission via food and food packaging, the news is good: It is a low risk.

Not to dismiss the substantive content – do read the whole interview! – but the explanation of N95 effectiveness reminded me of the Three Stooges.

How many COVID-19 cases have gone undetected? And are those who had mild cases of the disease—perhaps so mild they dismissed it as a cold or allergies—immune to new infections? If so, they could slow the spread of the burgeoning pandemic.

Florian Krammer, a virologist at the Icahn School of Medicine at Mount Sinai, and his colleagues posted a preprint yesterday describing a SARS-CoV-2 antibody test they have developed, and directions for replicating it.

... other labs could easily scale it up “to screen a few thousand people a day,” and quickly amass more data on the accuracy and specificity of the test.

Longer term antibody tests will also help researchers understand how long immunity to the virus lasts, a key issue for any future vaccine. For other coronaviruses, Krammer notes, immunity after an infection is strong for several months, but then begins to wane.

What is notable is how widely acknowledged within the medical community the testing problem is...

... even some South Korean researchers say that the CDC test family is more accurate than the WHO recommended family used in South Korea and many other countries...

... doctors are even working on raising the diagnosis rate by considering multiple tests together to raise the accuracy rate including swab, CT scan, and stool test (medrxiv link)

I think one of the things that is so hard to grasp for even smart knowledgeable normally reasonable people is that we are truly fighting something that stands right beyond the edge of human knowledge in the 21st century. The issues I have highlighted here are not unique to China, the United States, Singapore, or South Korea. They are not more adequately addressed by authoritarian communism or democracy. We're simply dealing with a scientific problem that currently stands just beyond the edge of human knowledge. It is not political incompetence or corruption that is preventing finding a sensitive and accurate test it is medical knowledge.

According to Crisanti, the director of the virology lab of U Padua, as little as 10% of #COVID2019 carriers show any symptoms at all. He sampled repeatedly the entire 3k+ population of Vo ', one of the initial clusters. He managed to virtually eliminate the disease in Vo', by testing not only the symptomatic patients to confirm they had the disease, but all of their contacts in the preceding days. These were then tested even if they did not show symptoms. And in fact 9/10 of positives did not show any symptoms.

It is these asymptomatic carriers that were doing the bulk of the spreading, at least after the initial measures were put in place. This means social isolation alone is not effective, or at least not efficient. He +- eliminated the disease in Vo' by 1} confirming the disease in symptomatic walk-ins 2) testing all possible contacts, REGARDLESS OF THE PRESENCE OF SYMPTOMS 3) securely quaranteeing all positives. Now the only people in Vo' with Covid19 are asymptomatic carriers in isolation.

The implication is that current measures of social isolation alone will slow down the spread of Covid 19... but are unlikely to contain it... Only sufficient testing capacity can do that.

...the later the tests come online, the more will have to be run. The implication is that the social isolation is not only about flattening the curve to spare the ventilators, but also about pushing it out enough to allow time for the testing to scale up and quarantine the asymptomatic carriers. Without them around, those infections need never happen, and (it seems to me) the social isolation can be relaxed if not yet entirely eliminated...

From Nicholas A. Christakis, a physician and Sterling Professor of Social & Natural Science at Yale: COVID-19 patients can transmit before becoming symptomatic (twitter thread)

Let’s call difference between latent period & incubation period the mismatch period (latent minus incubation), which can be negative (eg, HIV: asymptomatic carriers can be infectious) or positive (eg, smallpox: patients are usualy symptomatic before they're infectious).

The success of reactive disease control strategies has been shown to depend on the timing of the onset of infectiousness relative to the onset of detectable clinical symptoms. How long is the mismatch?

This is why TESTING asymptomatic or minimally symptomatic people is so important, and why the lag in implementing widespread testing the USA (compared to Korea, say) is so unfortunate.

In sum, on average, COVID19 patients take about 7 days from exposure to SARS-CoV-2 to show symptoms (typical range 2-14 days), and a meaningful percentage of carriers can spread the disease for 2-4 days before they are symptomatic. We have our work cut out.

White House Knew Coronavirus Would Be A 'Major Threat'...

My understanding is [President Trump] did not push to do aggressive additional testing in recent weeks, and that's partly because more testing might have led to more cases being discovered of coronavirus outbreak, and the president had made clear - the lower the numbers on coronavirus, the better for the president, the better for his potential reelection this fall.

Coronavirus: Why You Must Act Now

This is a really detailed, thorough analysis by Tomas Pueyo - you could just read this and skip most of the other posts below, in part because it references several of those posts.

This is what you can conclude:

Put in another way: Countries that act fast can reduce the number of deaths by ten. And that’s just counting the fatality rate. Acting fast also drastically reduces the cases, making this even more of a no-brainer.

At this point, given its lack of testing kits and its shortage of basic medical equipment like N95 masks, the U.S. seems to fit in the "overwhelmed" category. It is encouraging that local governments in some densely-populated areas are taking actions to limit social interaction among their citizens.

Don’t Panic: The comprehensive Ars Technica guide to the coronavirus

"Comprehensive" is right. This post is updated daily at 1500 EDT.

...the people of Bergamo do not come to the emergency room at all. They did well this time too. They followed all the indications given: a week or ten days at home with a fever without going out and risking contagion, but now they can't take it anymore. They don't breathe enough, they need oxygen.

... in the classical flu ... only when the VIRUS destroying the protective barriers of the respiratory tract allows BACTERIA normally resident in the upper tract to invade the bronchi and lungs, causing more serious cases. Covid 19 causes ... a real SARS because it arrives directly in the alveoli of the lungs and infects them making them unable to perform their function. The resulting respiratory failure is often serious and after a few days of hospitalization, the simple oxygen that can be administered in a ward may not be enough.

... when you see young people who end up in intubated intensive care, pronated or worse in ECMO (a machine for the worst cases, which extracts the blood, re-oxygenates it and returns it to the body, waiting for the organism, hopefully, heal your lungs), all this tranquility for your young age passes.

The current situation is difficult to imagine and numbers do not explain things at all. Our hospitals are overwhelmed by Covid-19, they are running 200% capacity.

Patients above 65 or younger with comorbidities are not even assessed by ITU, I am not saying not tubed, I’m saying not assessed and no ITU staff attends when they arrest. Staff are working as much as they can but they are starting to get sick and are emotionally overwhelmed.

Tons of patients with moderate resp failure, that overtime deteriorate to saturate ICUs first, then NIVs, then CPAP hoods, then even O2.

From Germany, SARS-CoV-2 can present with cold-like symptoms (pre-publication, not peer-reviewed):

Shedding of viral RNA from sputum outlasted the end of symptoms. Seroconversion [appearance of antibodies in the blood] occurred after about one week... COVID-19 can often present as a common cold-like illness. SARS-CoV-2 can actively replicate in the upper respiratory tract, and is shed for a prolonged time after symptoms end, including in stool.

An interview with Dr. Bruce Aylward of WHO

The real case fatality rate is probably what it is outside Hubei Province, somewhere between 1 and 2 percent.

Is the virus infecting almost everyone, as you would expect a novel flu to?

No — 75 to 80 percent of all clusters are in families. You get the odd ones in hospitals or restaurants or prisons, but the vast majority are in families. And only 5 to 15 percent of your close contacts develop disease. So they try to isolate you from your relatives as quickly as possible, and find everyone you had contact with in 48 hours before that.

The soap dissolves the fat membrane and the virus falls apart like a house of cards...

Wired: Trump's Coronavirus Press Event Was Even Worse Than It Looked

Then Trump cut Azar off. "But I think, importantly, anybody, right now and yesterday, that needs a test gets a test..."

This is untrue. Vice President Pence told reporters Thursday that the US didn’t have enough test kits to meet demand.

Federal officials have said they intended to distribute anywhere from thousands to millions of kits, and that as of Friday that 5,861 tests have been conducted. But that’s actually the number of samples tested, and some tests require more than one sample—so that number doesn’t reflect the actual number of individual people tested. A recent tally in The Atlantic confirmed only 1,895 people had been tested. For comparison, South Korea is testing 10,000 people every day.

it very much sounded like the president didn’t want to bring sick people to safety and medical care because doing so might make him look bad.

Another piece of countervailing evidence: At a meeting with pharmaceutical executives earlier this week at the White House, people had to explain to the president that a flu vaccine wouldn’t also work against SARS-CoV-2... As he took office, public health researchers and epidemiologists specifically cited his inexperience and misunderstandings of science as dangers in the event of a disease outbreak. And the administration has vastly cut back efforts to fight disease outbreaks internationally during Trump’s presidency.

So no. The world is not counting on the US response to Covid-19. And judging by this short press conference at the CDC, that’s probably for the best.