I've often wondered why an effective treatment for an allergy is to expose the sufferer to more of the allergen. According to the article (emph. added):

Existing vaccines for allergies involve three to five years of regular injections with increasing amounts of allergen... All the while the immune response slowly changes from a predominance of T-helper 2 (TH2) cells, immune cells responsible for triggering allergic reactions, to T-helper 1 (TH1) cells, which stimulate the production of protective antibodies.

So the trick is to make sure the vaccine contains only a small dose of the allergen -- so as not to kill the subject? And yet, as the article says,

Because nothing is directing allergens to the right place in immune cells, it takes a lot of allergen to generate a response.

The new vaccine is structured to deliver the allergens/antigens to the right places.

"[Components in the new vaccine] lower the dose needed to induce a T-cell response by a factor of about 100," says Reto Crameri of SAIF, lead author of the study.

What a virus needs to spread, the CDC team concluded, is an ability to bind 2,6 sugars, whether or not it needs this to replicate... One clue, they speculate, is that ferrets with non-contagious viruses... do not sneeze. Contagious ferrets do.

“The cells with 2,3-sialic acid receptors have been associated with the bronchial mucins,” Tumpey told New Scientist. This viscous secretion might inhibit these viruses, and prevent the irritation that causes sneezing, which “may contribute to the spread of influenza, at least in ferrets”.

...the CDC results suggest finding out what mutations make H5N1 bind to 2,6-sialic, as those could make it contagious.

One of the most interesting traits of the upcoming Apple phone is its multi-touch user interface. I'd never heard of multi-touch until about a year ago, when Jeff Han's NYU website made the blog rounds.

This evening I finally tripped across the first public demonstration of NYU's multi-touch interface, from last February's TED conference. It's a fascinating presentation, especially when Mr. Han begins musing on data visualization applications. (And it's pretty cool when the audience "gets" it.) He makes it easy to imagine new ways of interacting with molecular depictions and n-space grid projections.

Yes, we saw the keynote too! We have some very, very exciting updates coming soon- stay tuned!


Fun times.
TextMate has great syntax highlighting skills. Sometimes I'd like to copy code snippets from TextMate to VoodooPad, and I'd like to bring along the text highlighting. A simple copy-and-paste from the TextMate edit window doesn't do the job -- after all, it's a text editor.

Fortunately it is possible to copy with syntax highlighting. The procedure is pretty simple, if a bit obscure.


With a little more work you can paste syntax-highlighted snippets into MarsEdit.

Start out as above. Once the "View Document as HTML" window appears, select View->View Source. Another new window should appear which contains raw HTML.

Select it all (Command-A), copy it (Command-C), switch to your MarsEdit window and paste (Command-V). But first you'll need to re-work the content a bit, since it includes a <style> section which applies to your entire post.

Be sure to collapse the entire style section onto a single line, lest Blogger should insert a bunch of <br/> tags. 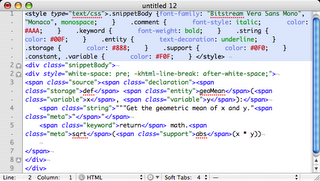 
I thought that, if you wanted to set the icon for a non-application file in OS X, you had to go through a convoluted process that involved copying the icon from another document. But it turns out you can just compose your icon with your favorite graphics tools, then copy and paste it into place.

For example, I wanted to change the icon on a QuickTime movie file. Here's what I had to do: 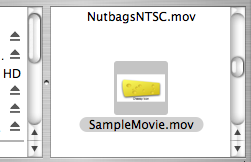 If you want to use <span> markup to define CSS-styled buttons with background gradients, and if you want to control the heights of those buttons, and if you are using Firefox 2.0, you have to jump through some non-standard hoops.

Firefox 2.0 doesn't support display:inline-block. If you have the Web Developer extension installed, it will report "Error in parsing value for property 'display'. Declaration dropped." And instead of getting a button with the right height for your background image, you'll get something silly looking, like this:

(I know, the colors look silly too. But that's not important right now.)

Yahoo! search turned up some background information, and a workaround for those who want to make links (<a href="...">) look like buttons:

Basically, you need to do this in your CSS:

The comments say that this bug has been logged in Bugzilla, and there's hope it will be fixed in Firefox 3.0.

I'd like the span's text to be centered vertically on a background image.

Here's the cleanest solution so far. Suppose the background image is 24 pixels high and the font size is 14 pixels. Then, doing the vertical centering manually, the y offset is (24 - 14)/2 = 5px. So pad the top of the span by 5 pixels, and set its height to the total height minus the padding.

In other words, add vertical padding to push the text down from the top of the span, then subtract that padding from the overall span height; apparently the final height of the span is height + padding-top + padding-bottom.

This works reasonably well for both Firefox and Safari.

I found this article interesting mainly because I like to let my fevers run -- "bake out the infection". Works for me, but then I've never had a really high, convulsion-inducing fever.

Anyway, interesting tidbits from the article:

It has been found that fevers help the body’s immune system identify an infection and raise an army of white blood cells (lymphocytes) against it. ...[Researchers] artificially created a fever-like state in a group of mice... This had the effect of doubling the number of lymphocytes visiting lymph nodes... Lymphocytes arriving at the nodes are screened for "killer efficiency" using fragments of potentially infectious material. Lymphocytes that respond to the fragments are found, are then selectively multiplied, and then swarm into the bloodstream to seek out and destroy the invader.

Apparently the extra heat of a fever activates high endothelial venule cells ("gatekeeper" cells, as the article calls them) in lymph nodes. They produce extra surface proteins that capture passing lymphocytes and draw them into the lymph nodes.

Evans says that although it fell out of fashion with the development of modern medicine, the idea of treating disease with heat has a long history: "Hippocrates used to heat patients with cancer," she says. And a century ago the physician William Coley discovered a cocktail of bacteria, dubbed "Coley's toxins", which appeared to combat cancer by producing a fever.


...those vaccine-induced antibodies do not recognise the Fujian virus, although they do attack the virus strains that Fujian has now replaced.
This means the Fujian strain has a selective advantage in vaccinated birds. "This novel variant may have become dominant because it was not as easily affected as other strains by the current avian vaccine," says Guan. That may also be why H5N1 infection in Chinese poultry has surged, rather than decreased, despite increased poultry vaccination.

Worryingly, the antibodies being used to develop human vaccines for H5N1 ... do not recognise the Fujian strain. This means the current experimental pandemic vaccine would not work against any pandemic virus that emerged equipped with Fujian surface proteins.


In the face of mutating pathogens it's easy to see why monitoring and quarantine are favored weapons against epidemics.
Firefox Vs. Acrobat - macosx.com

I just switched to Firefox 2.0 as my default browser under Mac OS X. When a friend emailed a link to a PDF document, I clicked it as usual.

Out of the box Firefox, unlike Safari, cannot view PDFs inline. That's okay, I really just want it to open it in Preview.

Alas, that's not an option. Firefox gives me the choice of saving to disk or of opening with Adobe Acrobat.

I searched through the files in my Firefox profile directory. There were no direct references to Acrobat.

A find|grep through ~/Library/Preferences turned up one promising hit:
./com.apple.internetconfig.plist

I closed Firefox, moved ~/Library/Preferences/com.apple.internetconfig.plist out of the way, and followed my friend's link again. This time Firefox let me choose between saving to disk and opening with Preview.app.

Interestingly, Firefox did not create a new copy of the plist file for me.

A less radical solution also works: when Firefox asks how you want to handle the PDF, tell it to save to disk. Also select the checkbox labeled "Do this automatically for files of this type from now on." 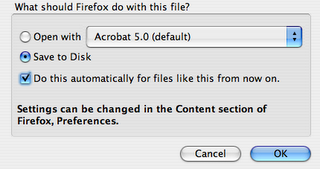 After downloading, open Firefox Preferences, switch to the Content pane, and click the "Manage..." button at bottom right. 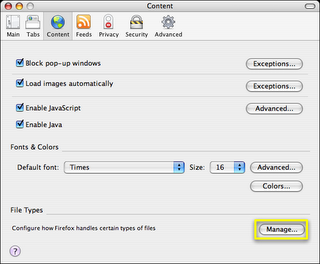 The list should now contain an entry for PDF. Select it, edit, and change to open with a different application than the default. 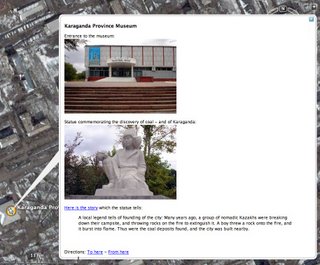 We've posted lots of blog entries and photos of places we visited on our trip to Karaganda. Wouldn't it be cool if you could take a virtual tour of the town and see where the pictures were taken?

Okay, probably not, unless you're a geek like Bobi and me. In which case you probably have Google Earth installed on your computer. In which case, here's a KMZ file to guide you around the town. Have fun!